Parliamentary Candidate out campaigning in Batley, Soothill, Birkenshaw and Gomersal 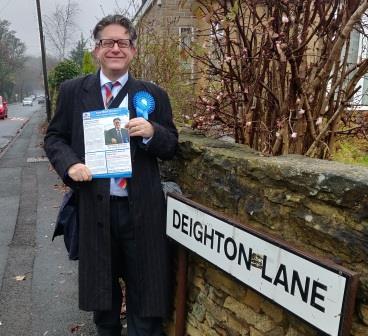 Over the past few days, Mark Brooks, the Conservative Parliamentary Candidate for Batley and Spen has been out listening to voters across Batley, Soothill, Birkenshaw and Gomersal.

In Soothill, he confirmed his opposition the large scale development in Chidswell which will lead to the loss of green belt, spoil the environment and lead to a huge increase in traffic and air pollution.

He also spoke to voters in Batley and Birkenshaw who told him it was vital to Get Brexit Done including many who had voted Remain.. He reiterated the point that Jeremy Corbyn’s Labour Candidate and former MP does not want the UK to Leave even though  a large majority of people in Batley and Spen voted for it. She has done all she can to frustrate Leaving which voters were all well aware of.

On Sunday, he also attended a Christmas fundraising event “A Taste of Christmas” on behalf of Kirkwood Hospice organised by the Batley and Birstall Support Group. There was fantastic Christmas Carols from the children of the Windmill Choir.